So is your rear end dragging as much as mine is? Jeez. I’d like to get the number off that truck that just ran over me. Seriously.

Unbelievably, I’m just now getting things back in order after Thanksgiving. The kitchen sink backed up and nothing we did was able to unclog The Clog. Of course the plumber man showed up today not an hour after I called with motorized 5 mile long snake and The Clog was history. So I’ve had to begin to carry the dishes still not washed from Thursday from the laundry room back up to the kitchen. But I’m not complaining. I’m just sick of looking at dishes all over everything. It’s enough to make someone crazy.

But that’s not all.

We were invited to a “Black Tie Affair.” Excuse me? Moi? The one who has practically lived in jammies and sweats or jeans for the past year? Goodness. To make matters worse, my dear MoH loves to go out in the shopping jam after Thanksgiving. It must be a type of party atmosphere to him and we sort of stroll around aimlessly, some years beginning to look for the perfect gifts for all 8,000 members of our combined families and friends’ neighbors’ brothers’ gardener’s mailperson. Yanno? Like that.

But not this year. I was forewarned that we would have a leisurely shop for a party dress so I could get beautified for this bash where I would know maybe like ONE person other than my beloved. O.N.E.

So with all my accumulated fashion wisdom gleaned from Stacy and Clinton egging me on, we proceeded to go into Bloomingdales, Macy’s Nordstrom, Ann Taylor, Sak’s and Needless Markup. I tried on dresses with straight skirts, and cocktail frocks with flouncy skirts. I squeezed into black dresses and dresses with net sewed over the skirt. Bows, sashes, vee necks and scoop necks. I tried them on. Everywhere I looked, I had to push through countless versions of Baby Doll dresses

in every size color and shape, and resembling a baggy shirts, or large handkerchiefs with lace and a token bow or ruffle. In size ZERO of all things. I know there were tiny women when I was growing up, and there was no such thing as a ZERO. Whose idea was that? How can you have a size that isn’t anything?

This one was tasteful, but it would have been nice if I could have gotten the sash around my upper torso — NOT the smallest place on my abdomen even though all the fashionistas swear that it is. Notice that the sash isn’t around the model’s upper torso. Guess my mid section is longer than hers. And maybe about 50 lbs. attached to my larger frame.

I HATE trying clothes on.

I especially DETEST trying on dresses.

I don’t want to be reminded that I’ve never been madly in love with my body (even when it was seriously worth being in love with), and that the whole point to putting on a party dress is to show it off.

So how’d the shopping go? I smiled the entire time. Until we returned home empty-handed and sat down at the computer to see if being a resident of Paradise is the problem I know it to be with respect to lovely clothing. I had that knowledge confirmed in a matter of minutes when I located several “ideas” for dresses that I’d venture out to begin again with on Sunday by myself. None of the dresses I remotely liked had been available in the stores we visited. They were available on line, however.

Then, I made the mistake of doing a Google search for something like “evening attire for mature women.” That isn’t exactly it, but I did find a link which proceeded to tell me all the things I shouldn’t do when dressing for elegant occasions when you’re my age. And although none of it was unexpected, having the stoopid smiling witch in the upper corner of the About page whose offensive information was “printed with permission” shut me down. My smiles were over, and the humiliation of the entire experience caved in upon me.

And so I indulged in a great blubbering, yelling, self-deprecating hate fest. Now this is pretty disgusting, because I do sort of like myself and deal with my insecurities by being humorous, wearing blase colors, less than perfectly-fitted clothing, and not looking in the mirror any more often than I need to. These techniques have gotten me by for quite a good number of years.

But I’d rather buy lovely things for my house than ever shop for a dress. And wasn’t I pathetic.

The MoH never quite understands how to deal with his Matilda the Hun when she gets like this. So that just makes it worse, because it feels like everything has abandoned me to my misery, and that no one has a life saver to offer me. I have to slosh through the ugliness of myself, let it work itself out, and then feel badly because my normal stalwart self vanished for a while leaving everyone else uncomfortable. And then that reaction makes me angry. Fire-breathing dragon, anyone?

But Sunday bloomed, and I went out. I even went to a different area of town, going into little boutiques I’d never be caught dead in because I just don’t feel comfortable in them. I even tried on clothes in them. I even allowed the shop owners to assist me. And I even thanked them for their patience as I left with nothing in my hand. Smiling.

I did impulsively purchase a dress that I managed to squeeze into in one store. It was cute, and so I gave in, giving up my life time love affair with structure and classic lines. Think Katherine Hepburn here. But the dress was more of something Audrey Hepburn would wear. It had a bow, for gawd’s sake. A flat, tasteful bow.

But I looked like a polska kielbasa in it.

There were divets and lines in places the designer never intended for them to be. So I made a mental note to figure out where I could purchase some Spanx and also snagged a pair of black dress trousers for good measure. Maybe, just maybe, I’d manage to escape having to wear a dress after all. But it wouldn’t be for lack of trying.

Good thing I bought that dress, because the more I shopped, the more determined I was to find something better. Like this one. Do you actually think I might have been able to find it on the racks? 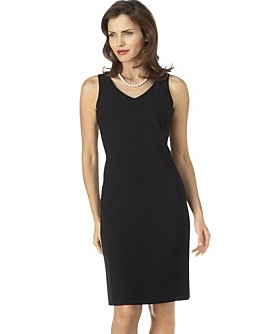 Um. NO. “We can order it for you and it can be here in five business days,” the clerks repeated over and over again. I could drive to L.A. faster than that. Or this one? I almost sort of kinda liked this one.

I actually tried it on TWICE. It looked great with my brown socks in that ugly dressing room light, so I figured I’d have half a chance with it at the “affair.” Except the upper arm police would give me a ticket. And a “shawl” (now how long have we been calling them pasmimas, hmmmm?) was a no-no, so with a sigh, I gave up the last semblance of hope that I’d possibly wear a dress to the holiday evening event at the Hotel del Coronado.

I did finally find a pair of shoes,

a champagne colored shell, and a black velvet swing jacket to go with the trousers I picked up with that dress, so my excursion and steel edged tenacity paid off.

Wait. Pants, you say? What happened to that dress? Well, I made it back to Bloomingdale’s and found the Spanx that were going to help me look like a smooth sausage instead of a lumpy one, but there was only one “expert” available, so I never got my question answered about whether the Spanx I was eyeballing could be pulled up over my head so that after inserting my entire self into it, and then the dress, I could be incognito. It certainly looked long enough to accomplish that. A couple of eye peek holes, and I would have been set.

My shopping excursion was seven hours long. Seven. I ended it at the grocery store, gathering a few things for the RT’s lunch this week, and ingredients for a dinner that had nothing to do with turkey or Thanksgiving. Thankfully.

The dress is going back today. Okay, so maybe tomorrow.

And I’ll smile at the party, enjoying all the women dressed as meringues and flamingos, butterflies and divas. I’ll be able to wear each of my articles many times again and make like a glamorous vintage movie star.

And I’ll never walk down the party dress path again.

Thanks for your patience. As I said in my previous post, I’m well behind on many niceties and duties (awards and memes…)in Bloggsville. I have been in foodland, but also have just been BLAH. I’ll blame it on the party dress debacle and then I’ll snap out of it. In the meantime, I hope you’re well. I’ll be by soon and you can smack me around for being so neglectful.

Water Under the Bridge